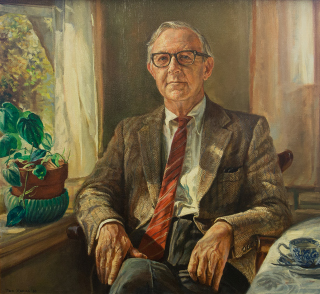 Ursinus College: A History of its First Hundred Years, or, the “Yost History,” as the book has affectionately come to be known since it was published in 1985, was a successful collaborative effort of the English Department and the Myrin Library. The book, which chronicles the first century of Ursinus College from 1869 to 1969, was carefully researched and written over the course of some fifteen years by Calvin D. Yost, Class of 1930, while Dr. Yost taught in the English Department and also directed the College’s library.

Assisting Dr. Yost with the book was his wife, Elizabeth, who not only encouraged and gently (and sometimes not so gently) persuaded Dr. Yost to complete the project, but also created the comprehensive index for the book, a major task in and of itself, and an effort most appreciated by those who consult the Yost History for research purposes.

The production of this informative and handsome monograph began under the library administration of H.E. “Chuck” Broadbent and concluded under the library administration of Charles A. Jamison. James R. Rue, then the College Archivist, individually selected the photographs that appear in the book. Wilda Schatz and Sandy Risher, who both held the position of administrative assistant to the Library Director, were also instrumental in creating the original manuscript that became the final copy that would go to press.

Writing in 1985, then President of Ursinus College, Richard P. Richter, shared these thoughts in his insightful introduction to Dr. Yost’s book: “This book will entertain all those who care about Ursinus. More than that, it will shed light on the driving force that comes from our roots and that still influences the way we teach and the way we go into the future.” These words ring with the same clarity today, some 30 years later in this digital version of the Yost History, as they did when the book was first published in 1985.