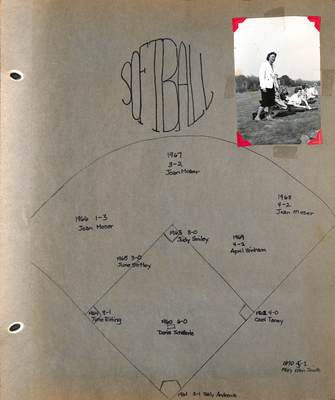 This is the one hundred thirteenth page of a scrapbook assembled and presented to Eleanor Snell by her student athletes on the occasion of Snell’s retirement testimonial dinner in May, 1970.

This page features the Ursinus softball record of wins and losses from 1960 to 1970 along with the names of team captains. It also features a photograph of Eleanor Snell on an athletic field with the team.

In Copyright. URI: http://rightsstatements.org/vocab/InC/1.0/
This Item is protected by copyright and/or related rights. You are free to use this Item in any way that is permitted by the copyright and related rights legislation that applies to your use. For other uses you need to obtain permission from the rights-holder(s).