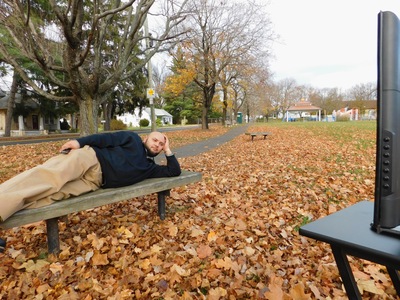 Juan Arias is a relatively new member of the Ursinus community, hailing from Maryland last year. Even though he has lived in various states around the country, he proclaims “everything I know, relates to Boston.” Even though he was born in Guatemala, Juan calls Boston his home because “that’s where I had my first girlfriend. That’s where I went to school, and where I learned how to drive.” His move to Eagleville, Pennsylvania allows him to enjoy some distance away from city life, especially from hours of traffic. In his few free moments, Juan spends time at home or looking for a quiet space outdoors. His new position at Ursinus has allowed him to focus on his family, including his five children ranging from nineteen to two years old. Juan now takes pleasure in helping his one daughter with her homework and becoming more involved in his older son’s education. Arias remarks, “Time flies…I need to do something. I need to be part of their lives. I’m around more and that matters a lot.”

In addition to his family, Juan finds enjoyment in watching television. He elaborates that if he did not have to go to work he would “sit there for hours watching shows and shows and shows. And order food. Lay in bed in my pajamas. And not do anything.” The activity itself brings a level of engagement with characters and storytelling because it draws him in. He looks for a connection, one where he can “put himself in the show.” His interests range from Law and Order, Suits¸ programs on Animal Planet and National Geographic, and even the new Chicago Med.

Self-described as “difficult in a lot of ways,” Juan takes a more honest and modest approach to the way he lives his life. When asked about the best gift he ever received, Juan described his decision to get Lasik eye surgery after years of eyesight troubles. “When I got home, I kept peeking around the bandages. I’ll never forget how clear everything was.” Outside of his kids and his shows, he also finds enjoyment in giving to others. Juan recounted a moment where he was able to give a gift to his father. It was a Windows tablet, which he said, “For him it was like he was a five year old kid. Where it was the best thing ever. I looked at his face and recalled when he gave me my first bike. He was a kid all over again.”