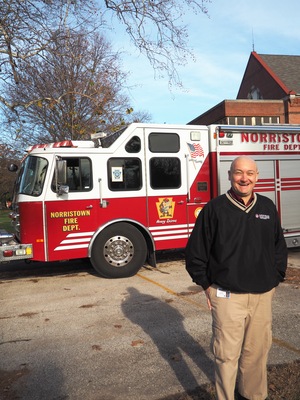 Word on the street is Chuck is one of the nicest Campus Safety officers we’ve had at Ursinus. In my opinion that is a very true statement. Chuck is one of those people who never judges a book by its cover. He feels as though it is important that he makes his own opinions, so when coming into our Ursinus community in the fall of 2015 Chuck heard stories, but that didn’t stop him from making connections with the students. He approaches every person as a person, not as a kid, not just as a student, but a person that is a new connection, now part of his new chapter. Before Ursinus, Chuck had been working since he graduated from high school. His work ranged from starting off in a K-Mart, to being a part of the SWAT team in Upper Merion as the Tactical Dispatch Team Leader. K-Mart was just the start to a commitment of 30 years (and still counting) to his wonderful wife Lynn. She has been there for him through thick and thin and as he puts it he really “owes his life to her”.

We can say to Chuck that he is an amazing human and truly is a hero; Chuck devotes his life to his family and doing well at his job. Chuck approaches every situation as its own and stops to understand each aspect, but the most important thing he does is enter “Chuck-Mode”- a nickname he was given by a past coworker. He quickly enters a state of being focused, determined, and calm while everyone else is in a panic. Chuck has many qualities of a hero. He is a brave, courageous, and selfless person. In my eyes he will forever be a hero and even a “Big Brother”. But if you were to ask him about his qualities he remains humble replying, “I don’t believe that I can change the world alone, but being positive, outgoing, and nice; it’s got to be contagious.” He has everyone’s best intentions in mind and I couldn’t think of a better person to have joined our Ursinus community. The only thing I wish I could change is that he could have come to Ursinus sooner, so I would have had more time to get to know the amazing person that he is. He has always lived in Norristown, it is a part of him, and I hope that Ursinus can serve as a new place that he also calls his home, surrounded by people that care about him just as much as he cares about us.