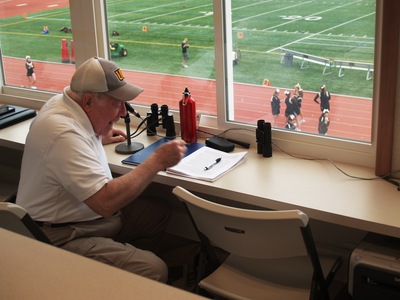 Gary Hodgson is a veteran member of the Ursinus community who works in campus safety. He is one of the most charismatic and talkative characters on campus and loves to laugh. But some may not know that he has been the announcer of the Ursinus football games for the last five years. Jim Wagner, the Sport Information Director, who reportedly never asked Gary what he knew about football, picked him for this job. But Gary quickly learned all things football and developed his own style over the loudspeakers. He combines his skills to make his own special broadcasts. This knack for announcing comes from his previous career in radio and television. He worked for six and a half years, from 1984 to 1990, at CBS and for four years on ABC. While broadcasting, he worked with stars that he and his aunt Claudia had listened to while he was growing up. This included the radio show Nick Carter, Master Detective. He had gotten his radio job after listeners heard him call in for a bid to sit in with the host. After the host had left, he was called upon to take a position with them, and the rest is history. He ended the shows with what would be his famous outro slogan, “Goodnight to you, and you, and especially you.” The first show he said this famous outro he added a shout out to his Aunt Claudia saying, “especially you Aunt Claudia,” who was extremely excited for him to get the job. But, he never found out if she had heard it, for he had found out the next day she had tragically passed away the night of his broadcast. For the six years he was on radio, he was number one in his entire area and he accredits his good luck to “the confluence of opportunity and preparedness.” Nowadays, most people know him from his famous announcing of senior football player James Roccograndi’s name. Gary Hodgson, in his 20+ year career in campus safety, is a valuable and irreplaceable member of the Ursinus community. He says, “Working hasn’t been a job because I have enjoyed it too much.”